This year, I plan to try making my own ham from “scratch,” i.e., buying a pork hock and curing and smoking it to hammy perfection. However, there is absolutely nothing wrong with buying a pre-made ham (fully cooked) with minimal or no added water or solutions.

I like to buy a half-ham — always bone-in — and glaze it with something amazing. Once I have had my fill of ham dinners, ham sandwiches, ham and eggs, ham Quiche, and had a ham-eating party for everyone I know (seriously, there is always 10x more ham than I think there is), I boil the ham bone for an amazing, hearty, crock-pot soup. 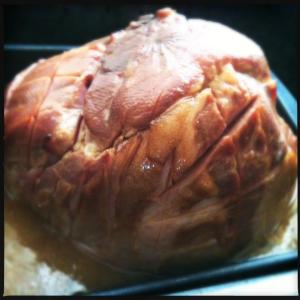 There are a number of different ways to glaze and baste your ham. Just prepare a glaze based on your favorites or tastes, and bake at 350 degrees for about 3 hours (a bone-in half-ham needs to be baked for about 18-20 minutes per pound).

If you prefer a strong flavor, I would suggest a hoppy beer like Arrogant Bastard or Guinness. If you prefer something sweeter and shinier, try a cup of frozen concentrated orange juice, mixed with balsamic or malt vinegar and a dash of honey. Or just mix a teensy drop of hot water with honey and spices like coriander and brown sugar. I also love Alton Brown’s drool-inducing “City Ham” recipe where he coats the ham with mustard, brown sugar and crushed ginger snaps, then lovingly spritzes the ham with bourbon as it bakes. That’s awesome.

Once you have enjoyed your ham dinners and ham breakfasts and ham lunches and brunches, make this soup. I like to place the entire ham bone, with all the hammy remnants clinging to it, into a large crock pot or heavy-bottomed pot on your stove. In my experience, the dried peas sometimes cling to the bottom of a stovetop pot, and this soup definitely requires slow-cooking. Since I prefer everything I make to be as easy and hands-off as possible (seriously, I will happily let that pot do all the cooking for me), I would highly recommend using a crock-pot instead of a pot on the stove.

Place the ham bone in the pot and add a full bag of dried peas. Chop up an onion, a few carrots and celery stalks, and a few cloves of fresh garlic. Then fill the pot with water (no bouillon or stock needed).  If you like your stew to be more starchy, add a diced potato. If you like extra spice, drop a jalapeño pepper in there. Put it on the high setting and let it simmer for 6-8 hours, or until the meat is falling off of the ham bone.

You may have noticed that the cooking time for this soup is approximately the same as a standard work day. This is not an accident. The longer this soup simmers, the more the flavors will come out, the softer the meat will get and the more meat will come off of that bone. You can prepare this in the morning before you leave for work, and when you come home, all you have to do is remove the now-clean bone from the pot, and dinner is served. If you get stuck in traffic on the way home and it cooks for more than 8 hours, that’s OK.

One thought on “Baked Ham your way and Split Pea Soup”