This year, I am going to try very hard to give away as many homemade holiday gifts as possible. Every year I try to do more and more homemade projects, and one of these years, every gift I give will be homemade.

I thought a good place to start would be with a big case of fresh, organic apples — I’m lucky enough to have a great local CSA subscription service where I can include a huge case of certain types of produce along with my weekly box of delicious items. 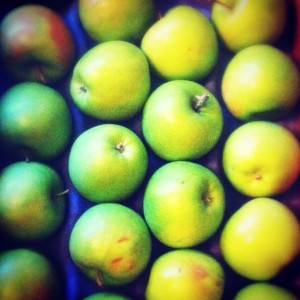 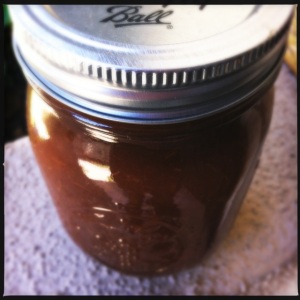 Check out my recipe for apple butter, as well as other great crock pot recipes, here.

I also found a way to use my slow cooker for applesauce, which was easier than I ever could have imagined. Luckily, my appliances did all of the work: my crock pot simmered the ingredients, my immersion blender pureed everything, and then it was done.

Yes, you read that right. Only three ingredients, unless you opt for additional flavoring. Just apples (of any type), a bit of acid (lemon juice) and some honey. You don’t even need to peel the apples, just scrub them and chop them. The crock pot does all the work, and 6-8 hours later, the apples will be soft enough for your immersion blender to puree into a smooth applesauce. 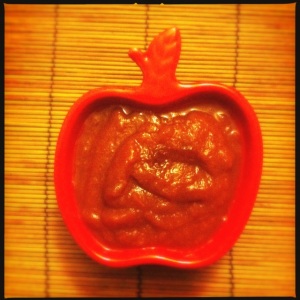 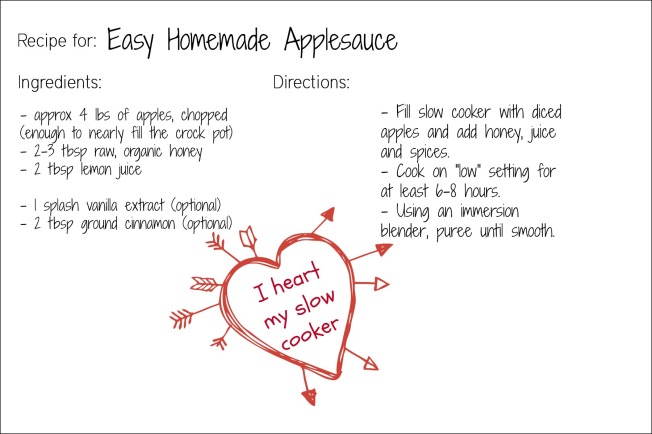 The winter holidays are a lovely time of year, and personally, when the weather turns frightful, I turn to my crock pot slow cooker. I love it for everything. It’s simply the best and easiest way to make a chili or soup (try my awesome smoked chicken posole) or to slow-cook a nice piece of meat (try this yummy Korean BBQ pork). But don’t stop there.

This year, with a few tiny exceptions, my holiday gifts to friends and family will be homemade, and I will be gifting many of the same dishes I plan to trade at the San Diego Food Swap this weekend. 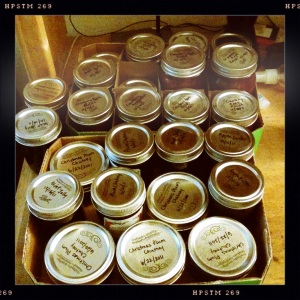 However, I do not plan to be standing over a hot stove.

Once again, my crock pot saves the day. Check out these two easy recipes for making delicious and easily gift-able homemade goodies.

(I adapted this recipe from Evil Shenanigans … by adding more bourbon, doubling the volume of the recipe, omitting the coffee and making it less hot. Not to be confused with this amazing, smoky and spicy Bacon Chipotle Jam.)

Render the bacon in a large stockpot and add chopped onions and garlic. Cook on medium high heat for about 10-15 minutes, until bacon is rendered and vegetables are a little tender. 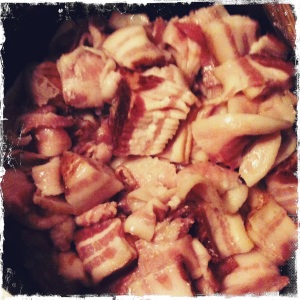 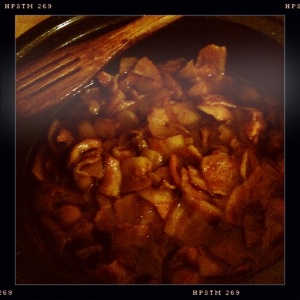 When it’s ready, transfer to a food processor or use an immersion blender in the crock pot to break the mixture down to a chunky spread. Pour into sterilized jars and keep refrigerated (this is not safe for canning).

(This is a super-simple and extremely delicious recipe. You can also vary this recipe by adding pumpkin and making pumpkin-apple butter, or pears or plums.) 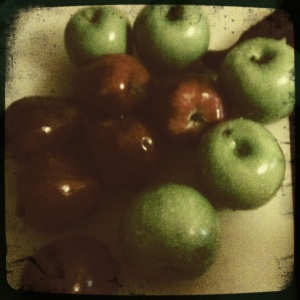 I like to mix up different types of apples for lots of flavor.

Chop apples and add to your crock pot with brown sugar and spices, and place on high setting. Cook for about 2-2 1/2 hours, until the apples are tender. Mash up the apples with a potato masher or immersion blender. 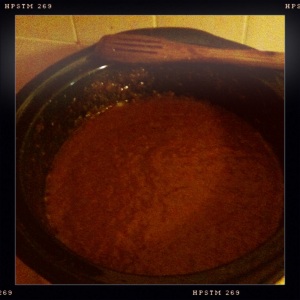 This has a lovely seasonal flavor, but you can make it easily all year round. It’s delicious on toast, biscuits, pancakes and more. It’s also safe for water bath canning. Enjoy!

I think I am pretty much on record as being a huge proponent of the crock pot, or the slow cooker. My mother and grandmother cooked in them ever since I can remember, and some of the best food I have ever eaten has been cooked for hours in one. There is simply nothing better than starting a great soup or meat dish in the morning before leaving for work, and then coming home after a long day to a hot, slow-cooked meal.  I can cite a thousand excellent recipes for various chilis, soups and slow cooker dishes that I have loved since I was a kid. My favorites are this insanely easy carnitas recipe (which also cuts the fat of the dish in half) and my smoked chicken posole. I am the proud owner of a great 5-quart slow cooker that I love, and since I started making jams and preserving, I discovered that there are also amazing jam and fruit butter recipes  — once again taking the work out of cooking. 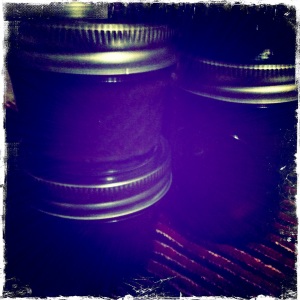 Aside from being good for the recipes that aren’t even recipes (like keeping your nacho sauce or apple cider warm during a party, or putting frozen meatballs in a spicy sauce for an appetizer), it makes recipes that were previously complicated into simple comfort foods. Slow-cooked pulled pork is as easy as meat and sauce in a pot. Homemade stocks are as easy as a chicken carcass covered in water. Then you walk away and let the crock pot do all the work. 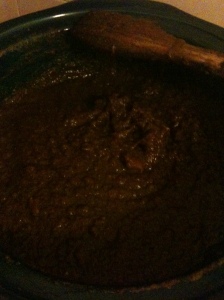 After slow-cooking for about 5 hours.

Do you have any idea how hard it used to be in the past to make apple butter? Imagine the poor chef, probably a tired woman with kids running around, standing over a hot stove for hours and hours. It makes me tired just thinking about it. Nowadays, the hardest thing you have to do to make apple butter (or apple-pear butter, apple-pumpkin butter, and so on) is chop up some fruit. 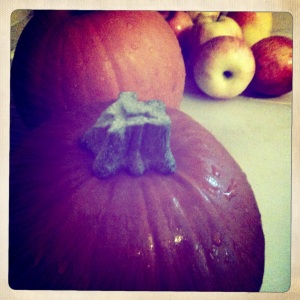 I adapted the Frontier Woman’s Homemade Pumpkin Puree — it’s amazingly easy and I didn’t even puree it at the end, I just put the chunks of roasted pumpkin in the slow cooker with the apples and spices. I barely did any work and it tastes fantastic!

Start with two small pumpkins … not the big, jack o’lantern type, but the smaller ones (with more flesh) that are used for cooking. Get a nice, sharp knife, and slice off the top (stem) and the bottom, then slice it up. 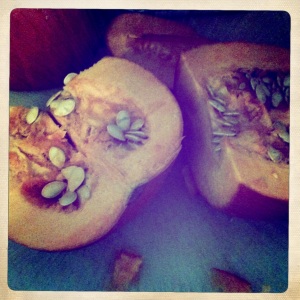 Roast the pumpkin over high heat. I don’t add anything — no oil, no salt, just to keep it pure — but if you know you’re using it for a spiced fruit butter or a pie, it wouldn’t hurt to add some spices before cooking to amp up the flavor. As is my favorite way to add flavor to stuff, I used my outdoor cooker to give the pumpkin just a little bit of a char. 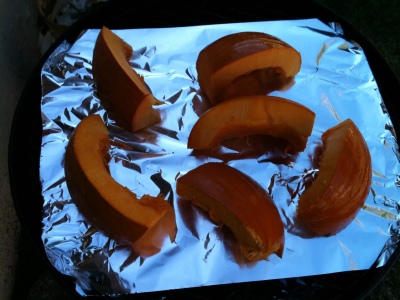 Plus … raw pumpkin smells gross — roasted pumpkin smells incredible. Once the pumpkin is fork-tender, the pumpkin rind comes off easily, and you can pull out the pure pumpkin flesh to puree and freeze for later, or add spices for a pie. In my case, I dropped it straight into my crock pot with about 8 chopped Gala apples (but use your favorite type or whatever you have on hand), and some brown sugar and pumpkin spice (ginger, allspice, cinnamon, and nutmeg). My personal method with recipes like this is to vary the amount of spices based on how much you’re making … and taste often to make sure the spices are to your liking. I think everyone would make this a little different. 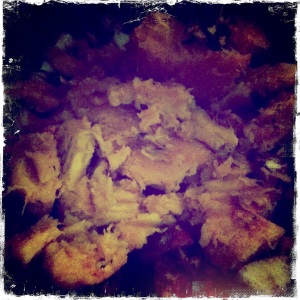 I set the slow cooker on the high setting and cooked it with the lid on for about 5 hours, then I pureed it with an immersion blender. You can also take it out of the cooker, blend it in a blender or food processor, and transfer it back –or, if the fruit is soft enough you can even use a good potato masher while it’s still in the pot. Some people also like their fruit butters to stay chunky, so you may not want to puree it at all (but in that case, make sure you chop up the pumpkin first so it’s evenly distributed). Then cook it without the lid for about 3 hours. Cook it until the butter is thick and syrupy, and ladle it into sterilized, hot jars, and seal in a water bath for about 20 minutes. 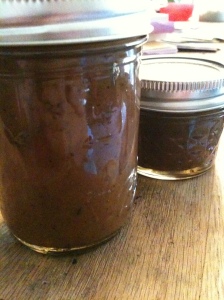 Note: the USDA says home canners should never ever ever can pumpkin, period. I have found several reliable recipes for pumpkin apple butter — heavy on the apple — and that’s what this recipe is based on. If you are nervous about it at all, just keep the jars in the refrigerator. I believe this recipe is sound for canning based on the apples.

Don’t forget about the pumpkin seeds! These tasty morsels don’t have to be tossed.  Roast them with olive oil and one of the following seasoning blends for about 20 minutes at 300 degrees. 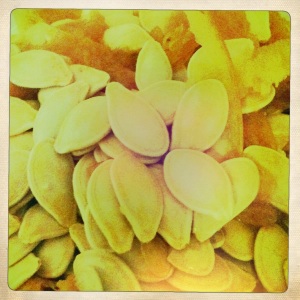 My favorite jams and jellies book by Linda Ziedrich has a recipe for apple cider jelly — one that, on the surface, seems like the best/ easiest recipe for jelly in the world.

Take a gallon of cider.

I think I can get used to this.

Oh, but there’s a catch — you get either jelly or syrup. You never really know which until you wait a few days and it’s either gelled or it hasn’t. The more I thought about it, the more I started to think that this was not a gamble I wanted to take. Although I am sure a nice apple cider syrup would be good on pancakes, this was jelly time and I wanted to make jelly. Then I started researching other recipes for jelly made from fresh apple cider, and it turns out that the “just boil it” recipe usually involves a lot of straining and skimming and scraping — and you still might not get jelly in the end. Blast!

Once again, living in San Diego comes in handy. A short drive to Julian, home of the best apple cider in the world, and a friend got me a sweet gallon of unfiltered and unpasturized cider. It’s delicious just on its own out of a glass, but I thought instead of taking a risk on boiling the whole gallon and not knowing what the result will  be, I would use part of it for a delicious spiced honey apple butter. A few simple ingredients and it’s on. 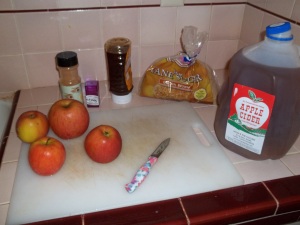 A few apples, 2 cups of cider, a half cup each of honey and brown sugar, and a few teaspoons each of cinnamon and nutmeg. The recipe calls for boiling the mixture, then straining out the solid chunks of apple, then letting the rest simmer. 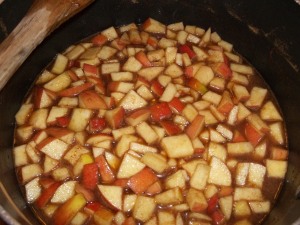 Personally, I prefer a few more chunks of fruit, especially in apple butter. I mashed them a little with a potato masher when they started to get soft, and later I also used my immersion blender to make the chunks a little smaller. 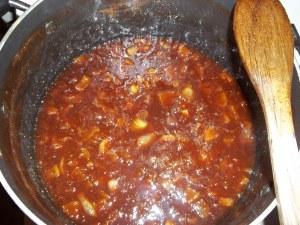 I also used a quart of the cider with some pectin and a cinnamon stick (according to my internet research, most people use Red Hots cinnamon candies, but I decided there was enough sugar with the 5 cups necessary to make the store-bough pectin react. A bit sweet for my taste, because I think the cider is delicious on its own without so much additional sugar, but delicious. 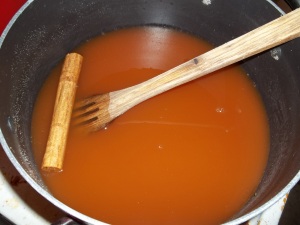 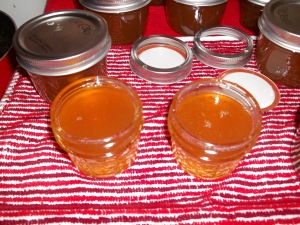