Hatch Chiles are truly a marketing marvel of modern times. Typically, from around the beginning of August through the end of September, you will see many of your local stores featuring the mild New Mexican chile pepper, and many of them will offer free roasting as well. 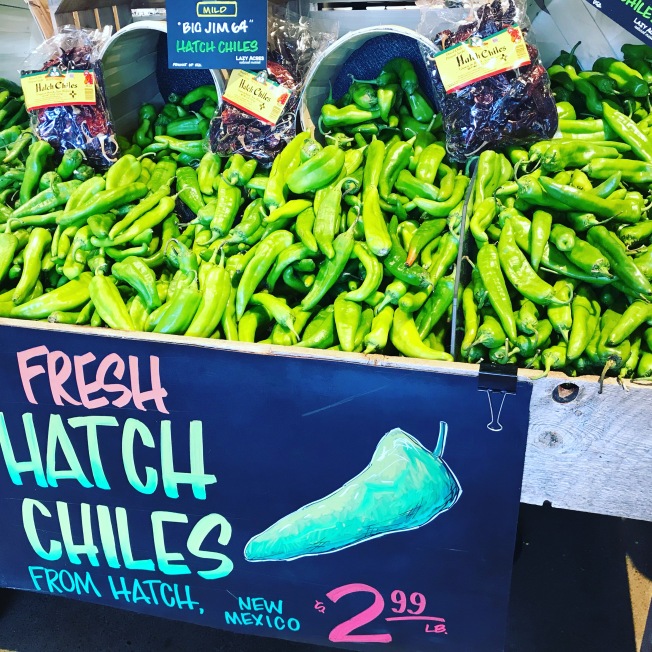 I was lucky enough to be the recipient of a “Hatch bag” from the Lazy Acres Natural Market in Mission Hills (on Washington Street, if you’re in San Diego). It’s a wonderful natural foods market, and they make a ton of their own products. I was given a bag not just of the chili peppers themselves, but a plethora of items made with Hatch chiles. 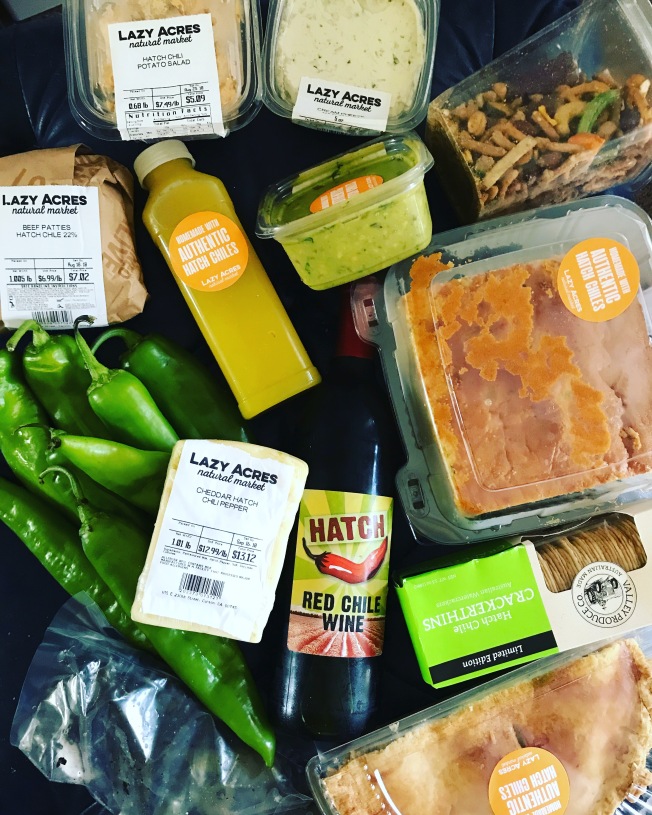 The first thing I did was grate up some of that Hatch chili cheddar cheese, and I used it in my Sunday meal prep to spice up my breakfast casserole.

The recipe for the casserole is wicked simple: the crust/bottom layer is crumbled up biscuits, then cooked sausage with mushroom and onion, then scrambled egg mixed with a can of condensed cream of mushroom soup. Top with cheese and bake til done, like 30 minutes on 400 degrees.

Next, I used the Hatch chili cream cheese and the grated Hatch chile cheddar cheese, plus ranch dressing and chicken breast, to make this amazing little snack.

If you’re ever stuck needing a quick, easy, potluck dish, or just a regular appetizer or snack, this is for you. Simply mix the chicken (canned or fresh/cooked) with ranch and cream cheese, then top with grated cheese and bake until bubbly. This is a very versatile  – the original recipe is buffalo sauce and regular cream cheese instead of Hatch-flavored cream cheese and cheddar cheese – and will be an instant crowd-pleaser.

I also used the spicy orange juice (I was too chicken to drink it) in my Instant Pot to make some delicious ribs … just cook the ribs (on their side, like pictured below) on a rack inside the pot, pressure cook on high pressure for 25-30 minutes (and natural release), and then finish off on the grill or under a broiler with your favorite BBQ sauce. You won’t be disappointed! 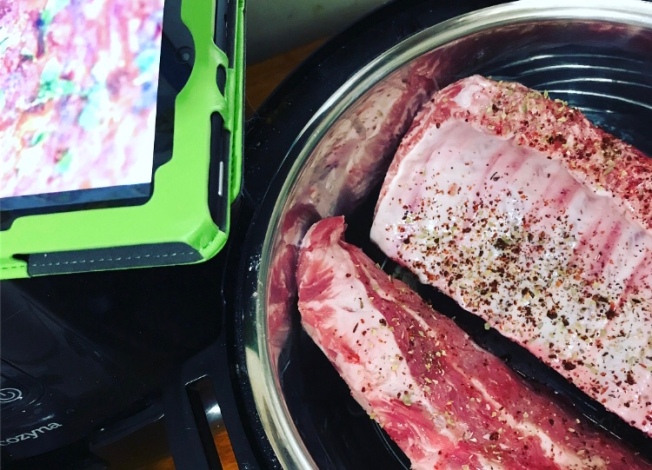 I also used the cornbread for a few dishes … it was a perfect accompaniment to the sweet taste of the Mississippi “Coke” Roast I also made in my Instant Pot.

Coke Roast is one of those recipes that sound really crazy when you read the ingredients, but you know it’s for real as soon as you taste it. This particular insanely easy and fast Instant Pot recipe is a pork loin (or beef chuck roast, but I think the pork is more tender), a can of Cola-Cola, a stick of butter, half a jar of pepperoncinis (with the juice), a packet of ranch dressing mix and a packet of au jus gravy mix. Pressure-cook for about 30 minutes with natural release, and serve over something spicy. 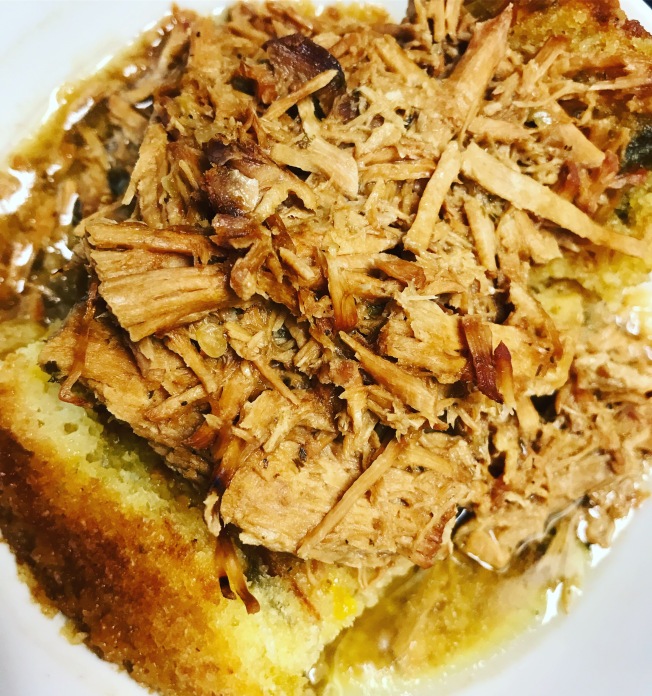 I used the Hatch chile cream cheese and cheddar cheese for variations on a few of my favorite recipes. In addition to the chicken-cheese dip, I also made one of my favorite side dishes with a spicy twist.

These onions are usually made with Asiago cheese … simply wrap a slice of bacon around a half an onion, then add broth, cream, and roast until tender. Then add a bunch of grated Asiago cheese on top. I followed this same recipe but added Hatch cheddar instead of Asiago. It doesn’t have the same funky Asiago flavor, but the spiciness certainly made up for it.

I think my favorite item in the bag was the delicious beef patties … they were clearly handmade, stuffed with cheese and lots of chunks of Hatch chiles, and the meat was very tender and fresh.

I served the burgers on cauliflower sandwich thins with ketchup, mustard and mayo, and topped it with some sautéed mushrooms and fresh Hatch guacamole from the Hatch bag. 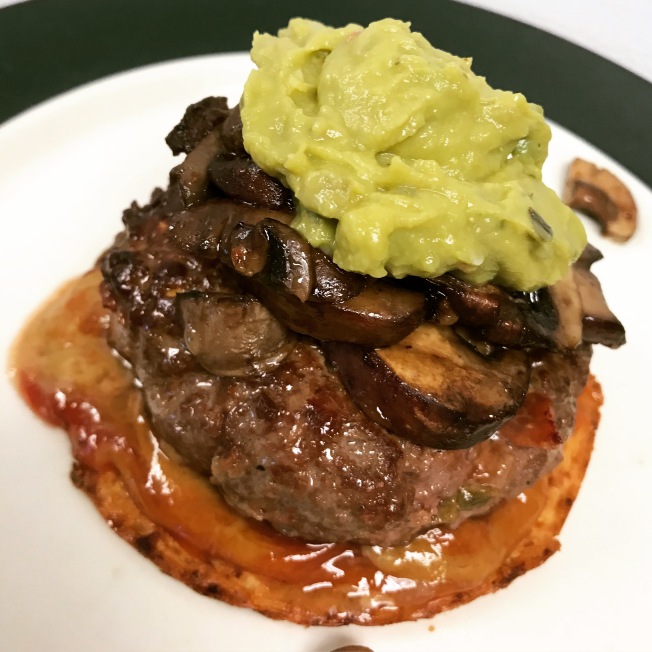 What’s your favorite Hatch chile recipe? Let us know in the comments and your recipe might be selected for our Hatch feature next summer!